This event has already taken place! Please make sure you are in the correct year. ×
Jan
10
Friday
Jan
10
Fri 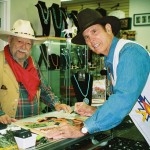 Award-winning actor and author, Michael Dante will be a special guest during this week’s Heritage Days and Apacheland Reunion.Dante received the Golden Boot Award; the Oscar of Westerns, the Silver Spur Award; the Golden Globe of Westerns, and many more.

Michael will show one of his films in the Elvis Chapel on the Museum grounds with a question and answer symposium after both showings.

Michael penned his autobiography, Michael Dante – From Hollywood to Michael Dante Way in 2014 with stories about being under contract to 3 major studios, including many of the 30 films and 150 television shows he appeared in including his journey through Hollywood during the Golden Years leading to a street named after him in his hometown of Stamford, Connecticut, ‘Michael Dante Way.’

Michael Dante & Audie Murphy filming at Apacheland that were filmed in and around the Apache Junction and Tucson areas of Arizona. He will be one of the celebrity guests of honor at Heritage Days this Saturday and Sunday.

Michael Dante played the title role in the classic film Winterhawk and has completed the sequel, in book form, entitled Winterhawk’s Land. The original film Winterhawk can be viewed on You Tube now, for free. He will be selling his autographed books, photos, and DVD’s all weekend.