This event has already taken place! Please make sure you are in the correct year. ×
Oct
19
Saturday
Oct
19
Sat 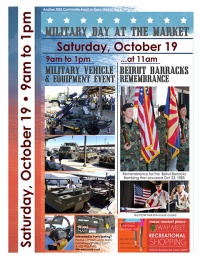 There will also be equipment, uniforms, and swag on display.

Chuck Byers, an Army Medic during Vietnam, will display his Medic Bag. This bag is a testament to the courage possessed by Chuck Byers and all Medics during the war. The bag represents hope and human resilience and endurance to survive wounds suffered on the battlefield. Mr. Byers words of encouragement accomplished as much to help a wounded service person to survive, as much as the meds and bandages he used on them.

The Beirut Barracks Remembrance: The public and all service people are invited to participate in Mesa Market Place Swap Meet’s Beirut Barracks Bombings Remembrance at 11:00 a.m. on Saturday, October 19 The POW MIA KIA Honor Guard will officiate and lead the remembrance.

Military Day will be set up on the Fourth Row, Row D. The event is free.

A table will be set up so adults and children can write notes and color pictures to go into ‘Packages From Home’ care packages headed to service people serving in the Middle East.